My Simple Quotes to Live By is NOW AVAILABLE ON KINDLE for only $1.99!!  Go to http://www.amazon.com/s/ref=nb_sb_noss?url=search-alias%3Ddigital-text&field-keywords=my+simple+quotes+to+live+by or

http://goo.gl/YXrvl (the shortened version of the link)

DON’T STAND IN THE WAY OF YOUR OWN LIGHT.  ~ Joyce Fields 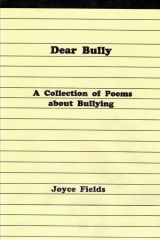 Joyce is reading six poems from the bookat  http://www.youtube.com/watch?v=-3sdKM-yl2M.  And please leave a comment!!

Order today for all the children you know and love. . .http://www.GoodShortBooks.com! 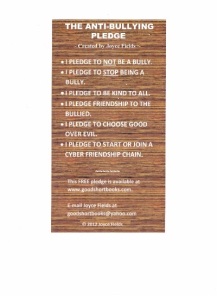 It’s FREE and available at http://www.GoodShortBooks.com!  A useful and very effective tool against bullying.

Gives kids something to live up to–their own pledge! 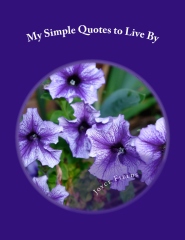 ANNOUNCING A NEW BOOK!!  My Simple Quotes to Live By.  This book contains 169 original quotes on 90 pages.

The “Constant Quote” (above) was chosen to appear in the 2013 Women’s Advantage Shared Wisdom Calendar that is available at http://www.womansadvantage.biz/prod_cat.php

Max Robinson was an American broadcast journalist for ABC News and served as a co-anchor for ABC World News Tonight.  He was the first African American broadcast network news anchor in the history of American television.  He was also one of the original founders of the National Association of Black Journalists.

Robinson was born on May 1, 1939 in Richmond, Virginia, to Maxie and Doris Robinson.  A talented student, he later attended Oberlin College, where he served as president of the freshmen class.  He later attended Indiana University and eventually earned his degree from Virginia Union University.  Robinson served in the Air Force and eventually received an honorable discharge due to a medical condition.

Robinson began his television journey in Portsmouth, Virginia, in 1959, where he applied for a position at a local radio station that had a “whites only” policy, which, at the time, was legal.  Nonetheless, the station owner allowed Robinson to audition for a position, along with several white candidates.  Robinson was given a job reading the news on the air, although he was told that his face could not be seen.  When Robinson protested, he was fired.  Afterwards he moved to Washington, D.C., and worked at WTOP-TV as a cameraman trainee and in other behind-the-scene jobs.

Robinson found a job at Washington’s WRC-TV in 1967, remaining there until 1978.  While there, he won six journalism awards for his coverage of civil rights events of the era, including the 1968 assassination of Dr. Martin Luther King, Jr.  By the end of the decade, Robinson was one of the most popular news anchors in the nation’s capital.

In 1978, Robinson was selected by ABC executive Roone Arledge to become the co-anchor of ABC News.  He served in this capacity until 1983.  Despite his success, Robinson was sensitive to racism and its negative impact on him and other black journalists.  During his time at ABC, Robinson clashed with the management of ABC News over what he saw as the one dimensional, often negative, portrayal of black Americans.  He was also known for his erratic behavior, frequently failing to report to work.  By 1981, Robinson had developed a dependency on alcohol and was diagnosed for depression.  His career suffered.  By 1985, he was reduced to anchoring the weekend news and news briefs in Chicago.

In the fall of 1988 while delivering a speech at Howard University School of Communications, Robinson became alarmingly ill.  He checked himself into the university hospital, where he remained for months.  He died on December 20, 1988 from complications due to AIDS.  While speculation surrounded his sexuality in the weeks and months following his death, during his life Robinson denied being gay or bisexual.

Robinson was married several times.  He had three children from his first marriage—Mark, Maureen, and Michael.  He was also the father to another son, Malik, from his second marriage.  His third marriage was to Beverly Hamilton.

http://www.thebirkineffect.com  Musings of a “want it all” 21st century woman.

http://www.petedenton.wordpress.com  Writer of short stories, Flash fiction, and some scripts.

As a thought leader for today's generation, I choose to be part of the solution and am doing things that positively impact people's lives. In addition to being a happy, married (since 1967!) woman, sister, aunt, mother, grandmother, great grandmother, I have over 40 years' experience in "Corporate America": Stenographer, Secretary, Supervisor, Analyst, Office Manager, Executive Assistant. I am also a professional proofreader and the author of 10 books (mostly non-fiction)--http://www.GoodShortBooks.com).
View all posts by Line of Serenity (Joyce Fields) →
This entry was posted in Uncategorized and tagged aviation, current-events, entertainment, media, politics, transportation. Bookmark the permalink.